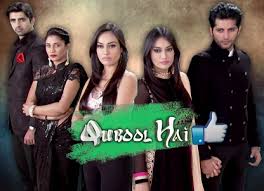 New Sanam/Chudail is controlling Aahil with black magic and gets closer to him. Ang Lagade Re plays……Reporter says Chudail is trying to woo Aahil and wants to get his love. She is trying hard and is ready to cross all limits today.

Aahil says he is loving it. New Sanam says she is trying to seduce him. Aahil says funny part is she will put her finger in the mouth after the cut. Aahil gets pictured clicks with choreographer and new Sanam. Keep reading.